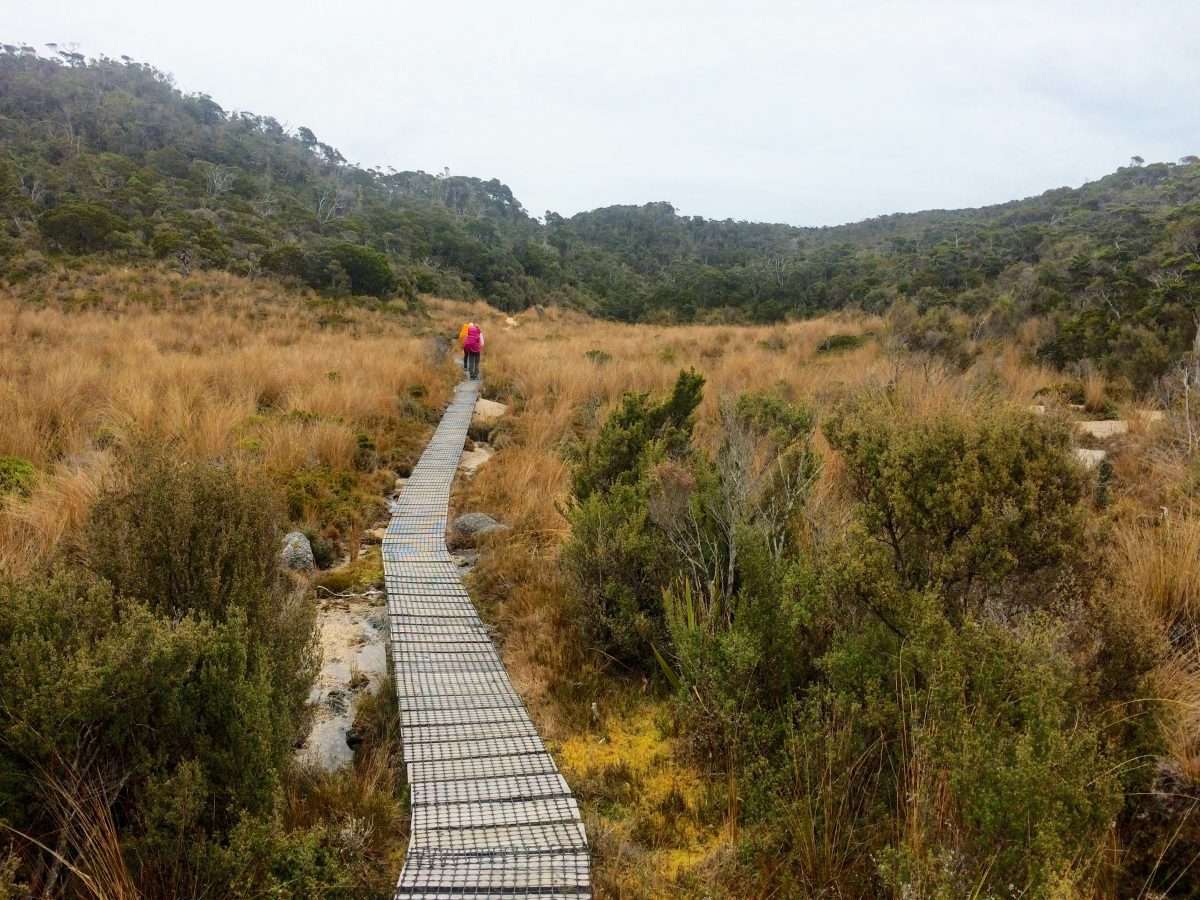 After our successful walk in 2016 on the Kepler Track, in 2017 we selected the Heaphy Track, once again expertly organised by Mary.  The Heaphy Track is an easy, scenic 80km walk located in Kahurangi National Park in the north west corner of South Island. The final day is a stunning 17 km walk on the wild South Island west coast.

The route of the Heaphy Track

The well-maintained track follows a trail originally used by the Golden Bay Maori in their quest for the pounamu (greenstone). The track is named after Charles Heaphy, one of the first Europeans to traverse the coastal part of the route. The Heaphy has a variety of landscapes: we walked through forested mountains and tussock downs, alongside pristine rivers with white rock beaches, through ancient forests of nikau palms and giant rata trees, and the wild and beautiful west coast.  The walk along the Heaphy River was a delight – Harrison Ford could have appeared at any time though the vines and palms growing among the weird, mossy limestone formations.

We spend a day in Nelson to shop for food and organise our packs.  We had an early start for the 3 hour bus trip with Trek Express who dropped us at the sand-fly invested Brown Hut. We collected and dusted off our previously clean packs from the bus trailer, and covered ourselves in various sand fly protections. Then we set off on Day One of the walk.

We climb gently and steadily from about 150m up to 900m over 17km. There were intermittent views across the valley through the beech trees and from the highest point at Flanagan’s Corner. Close to the hut we saw our first weka, and were fascinated by this seemingly unafraid ‘chook like’ flightless bird. At this point in time, we had no idea of their capability to steal and just how many more we would see!

Perry Saddle Hut is a new and well equipped hut with gas, solar lighting, 28 bunks, fresh water and toilet facilities. As with all the huts we stayed in, pre-booking is required.  After selecting our bunks and having a cuppa, the brave girls visited the ‘Day Spa’ down the hill from the hut. The water was coolish, but there was a good size water hole and it felt very good to refresh after the day’s walk.


We gathered around the kitchen tables to start our pink beanie knitting challenge as part of the PussyHat Global Virtual March celebrating International Women’s Day on March 8th  and subtlety referencing a comment made by President Donald Trump.  With a range of knitting abilities and a variety of wool, it was clear that no two hats were going to look the same!

The hut warden put the weather forecast the notice board for the next day with a definite forecast of rain!

After cooking our first “gourmet” meal from our dried food supplies, we retired to bed and yes, there was the odd bit of snoring heard from other hut inhabitants through the night! They were dutifully noted to be avoided if we ended up in the same hut another night!

It was not raining when we woke up, however we were expecting rain to start at any time. Forecasts said that we could expect up to 50mm so the wet weather gear was put on the top of the packs and pack covers put on. With two huts (Gouland Downs and Saxon) along the way, we set our break stops accordingly. Thankfully the forecasters had it wrong – the front had decided to continue its thorough saturation of Sydney!

We hiked across the red tussocks of the Gouland Downs crossing numerous creeks. The Enchanted Forest was something out of Lord of the Rings with its moss and lichen covered formations growing over limestone arches. Along the way, we found a couple of shells of the giant nocturnal carnivorous snail, Powelliphanta. We then continued along a ridge to Mackay Downs. We had the company of a helicopter for the afternoon presumably doing track maintenance in the area.

The James Mackay hut was once again very well equipped, including flushing toilets. The ‘Day Spa’ was not as luxurious as the previous night, however there was enough water to freshen up. From the hut, we had views down to the Tasman Sea and a pink sunseat over the Heaphy River mouth, where we would be walking the next day under a clear sky! Yippee!

At dinner, we met the delightful Katharine of 2 Minute Needles, who shared her knitting expertise with us.  We had a serious case of food envy that night, as we ate our dehydrated morsels while Katharine and friends tucked into a gourmet meal of risotto with wine and more.

Our packs were starting to feel just a little lighter by now thankfully! There were a few blisters amongst us and some impressive sand-fly bites, but we were all happy and enthusiastic to continue along our way. The morning sky was clear and the air cool, perfect weather for our lucky group of eleven walkers.

We began the slow descent, with views through the forest of the river valley, until we arrived at Lewis Hut. Once again abundant in sand flies and cheeky wekas, we found the best place to avoid them for our morning tea was on the rocks in the river where there was a slight breeze.

From here, we crossed the first of many suspension bridges and hugged the famous giant Northern Rata Tree with a girth of 12m. The walk was stunning alongside the river through the forest of Kahikatea, Rimu and Rata trees. This area can be affected by flooding after heavy rain and become impassable.

With plenty of time to spare, a few of us stopped on a small beach and had a swim, and then stopped again later to have lunch on the side of the river. We were ‘weka’d’ with Jane losing an apple and her hair comb!

After arriving at the resort-like Heaphy Hut with its ravenous sand flies and mob of weka, we had a swim in the lagoon upstream from the river mouth. Subject to some pretty ferocious weather, most of the beach at the river mouth was completely and impassably covered in dry timber that had either been washed in from the sea or come down the river during storms.

This area is also the site of an interesting Polynesian archaeological site dating back to the 13th – 14th century.

We were warned by the ranger to be very careful on the beaches as recently someone had recently lost their life caught by a rogue wave whilst walking along the beach.

The pink knitted hats were coming along nicely. We had a stunning sunset, followed by clear starry night skies. This was our last night of dried dinners and we were all looking forward to some fresh food and a beer or wine in Nelson!

Our last day and with a deadline of 1.30 pm to catch the bus, we were all up early to walk along the coast. Once again, we had the most perfect day, however the extent of what nature could dish up was not lost on us as we saw landslides, remedial track work, wind blasted vegetation and creeks that would be impassable with a good fall of rain. We had checked the tide times so knew we would be OK for the crossing at Crayfish Point.

We all arrived for the climb over the unmistakable conical Kohaihai bluff to the river and track end with time to spare, along with other walkers that we had met along the way.  We were all sad that it was our last day. I could have just kept on walking!   By 2pm, we were in the bus for the long 5+ hour journey back to Nelson.

Logistics of the Heaphy Track

The track  can be walked in in four to six days in either direction but it is nice to have the most scenic part of the walk on the last days of the walk. We chose to walk four days walking with three nights in huts (Perry’s Saddle, James Mackay and Heaphy Huts). Others we met along the way were adding an extra night to the trip breaking the long 25km second day into two shorter days. There were additional huts along the route so this allowed for some flexibility in itineraries. The huts are cheap, clean and well equipped. The track can also be mountain biked at certain times of the year. It was easy walking with a mix of rocky sections contrasting the soft forest floor and gentle gradients. No guide is needed – the track is well marked with good information provided in the huts.

We  reviewed what we would do differently next time, particularly for sharing food and making meals more appetising.  Some of us tried the Nelson based Absolute Wilderness products which were very tasty.

The knitting of pink beanies on the track was a great success!  Perfect relaxation at the end of each day over a cuppa.  We were lucky to meet Katharine, of 2MinuteNeedles  (also on facebook as 2MinuteNeedles) who inspired us by showing us her multi-coloured socks (knitted on a vintage sock knitting machine) and her fingerless mittens. Katharine stocks lovely kits for making mittens – so that will be our next hiking craft project.