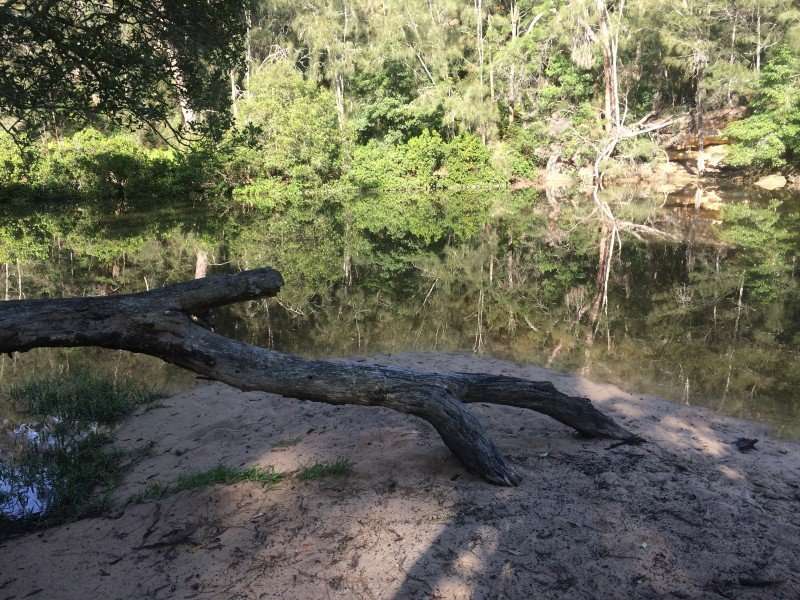 The total walk is about 11km, with some nice steep climbs totalling about 500m.  Duffy’s Track has a lovely footpath from the end of the service trail, with beautiful stepping stones across the creek and through the mangroves.   It is a beautiful spot for a swim on a warm day, but it is rumoured to be a hangout for bull sharks and watch out for the oysters on the rocks.

Nothing much remains of Duffy’s Wharf on Cowan Creek, constructed by Peter Duffy in the mid 1850’s in order to load timber.  Skippy was filmed at Waratah Park, between Duffy’s Track and the Bibbenluke Track, but the Park closed in 2009.  Land in the area is now being developed, which means the bush track between Bibbenluke Rd and Booralie Rd may no longer be accessible.   There is an engraving of a bird on the rocks at Slade’s Lookout, but whether it is a duck or an emu, aboriginal or more recent is not known.

Wildwalks has track notes for the Slade Lookout and Duffy’s wharf track.  The Bibbenluke Track is easy to follow from the marked gate at the end of Bibbenluke Ave, and shown on the topo map.