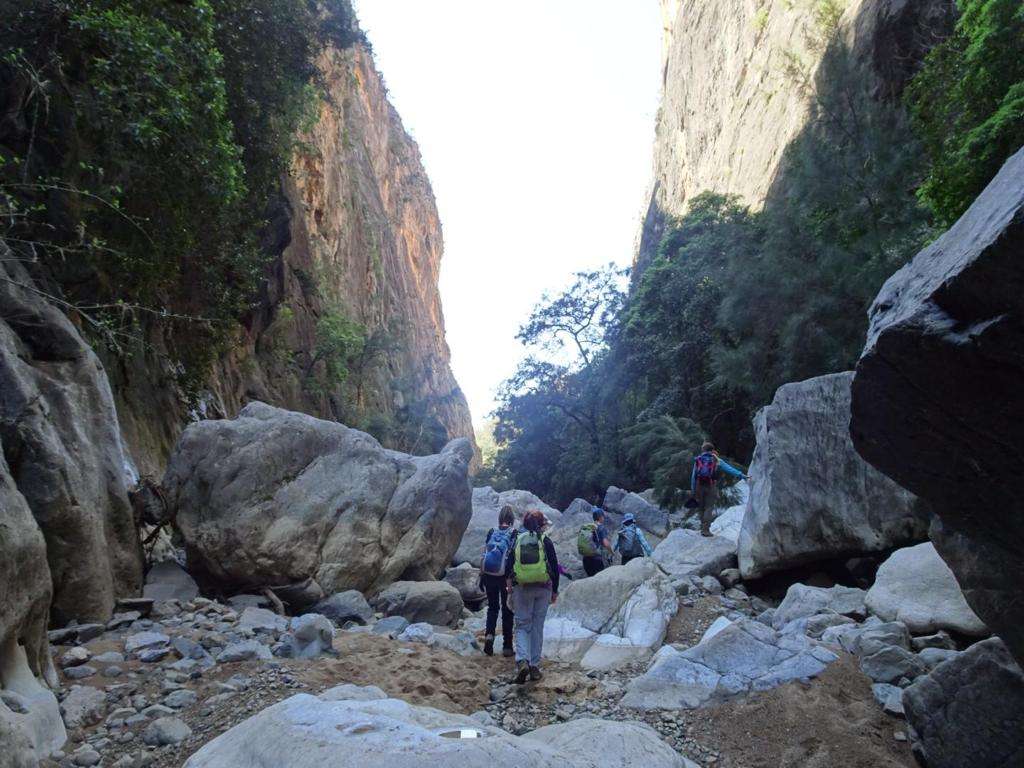 Sure, canyons can be serious. But Slot Canyon?  That sounds slim and slot-ish enough to slip into your pocket.  At least that’s what some of the Sole Sisters might have surmised…­ BEFORE Gina initiated the Grand Adventure.

Three nights of car camping in Bungonia National Park (about two and a half hours south of Sydney) in mid-September sounded inviting to the ten of us who dug out tents and sleeping bags.  One of New South Wales’s oldest parks, Bungonia has a rugged, dramatic beauty, with an assortment of walks and lookouts and fascinating  rock formations. Plus, anyone who had walked with Gina previously  knew her to be the very definition of organisation and positivity.

It would be a splendid time.

Four group members arrived early enough on Day 1 to explore The Green Track, which looped walkers around  Bungonia on an undulating path, off to various scenic vistas for a few hours.  These vistas included a look down (that last word might be considered an understatement) at the Slot Canyon, the very area we were to navigate  the following day.

Another viewpoint introduced an additional key player: The Quarry.  The nearby massive limestone quarry does limestone blasting during the week, sometimes resulting  in rockfalls right into the Slot Canyon.  (Please note above paragraph regarding our planned activity in the Slot.)  Perhaps it would be best to navigate through  there before blasting would begin?

Blasting was usually scheduled around 3 PM. Oh, we’d be well out by that time.  But the group of four were hearing some  blasts a tad earlier. What was the time? 1.20 PM.  Hmm.  Perhaps the timing of blasts was, in fact,  a bit  flexible….just flexible enough to start the trickle of adrenalin through each walker’s body.

By night the rest of the cheerful, chattering walkers had arrived, erected tents in the peaceful surrounds of the Bungonia campground and assembled their supplies for the next day’s walk, as directed by that guru Gina. The ‘basics’ for this day walk were to include a down jacket, thermals and alpine gloves  ‘just in case’.  Icy air nipped at our fingers as we organised, reminding us just what a beast a September night in Bungonia might be if one just happened to be spending it stuck at the bottom of a certain canyon.

Our Big Day dawned cold but clear and still: tip-top conditions to cover the handful of  ks we planned to walk over…… about five to six hours? There would be a good reason for that ratio.

We headed off in cars for the William Mitchell carpark. Then with a few final zips and clicks, and empowered with breakfast aplenty, we marched onto the Red Track, marked as ‘very steep’ on the NPA map (and, elsewhere, some of us had noted it  described as STRENUOUS).

Quietly stunning scenery surrounded us near the top, with plenty of blooming grass trees waving their yellow flagpoles triumphantly and boronias and other wild flowers popping up now and then.

But it was, admittedly, hard to say what the scenery was like  once we started the descent because the only thing that many of us could see clearly was our feet on this extremely dramatic incline with lots of loose bits of shale underfoot.  Fingers cramped tightly around the walking poles, keeping most of us semi-upright.  Every once in a while we paused for breath, for water and for a quick, rewarding look around at the increasingly dramatic scenery, sheer rock walls now sliding up around us.

It was during one of these pauses that someone’s walking pole slid from her sweaty grip and tumbled down the incline. Oh dear!  (Alas, dear reader, the  pole belonged to your embarrassed scribe…)  So now what?

The indefatigable Gina leapt into action. Had there been a phone booth (and there decidedly was not), she would have emerged in a cape and tights.

Before you could say ‘I love near-death adventure’, she was scrambling down the precipitous slope (despite the pole owner’s protestations) on all fours, miraculously retrieving the critical item, which was quickly reclaimed in a now iron grip.

How  awe-inspiring to look up and around us at the walls and crevices….at the small trees somehow managing to grow there….and to feel, unexpectedly, a section of soft sand underfoot for a short time.  A different world.

Then  in a blink, there before us were the

Yes, they were beautiful in their own lime-stony way – but also oh so large. We stared around us, eyes round and hearts pattering right along nicely at a slightly more allegro tempo.

Stashing our poles in our packs, we prepared to hug rockfaces, scramble across roughness, leap across voids, slide down little cliffs, toss our packs, hoist our bodies…..and trust in our fellow walkers.

In other words: somehow manoeuvre our collective selves and our sizeable backpacks through this city of boulders to the other end of the canyon.

There were adrenalin-filled intakes of breath and sighs of satisfaction.  Was that a giant goanna?   Was that a very large (dead) snake draped over that branch? There were moments of self-doubt and others of triumph. By the time we reached the other end of the canyon: whew…..!  But such beauty and what a chance to embrace it – literally hugging boulders as we went.

And then? The perfect time to perch ourselves along the side of the canyon and extricate lunches from our packs.  We’d made it to the other end before Blasting O’clock! So now all was well….

…Or was it?  Well, actually after lunch there did just remain the not insignificant issue of climbing back out.

By then warmth sizzled the air and a fair amount of the nearly vertical ascent was exposed. Supportive walkers encouraged one another as bit by bit we headed upwards. (Gene tracing for some of the Sole Sisters would undoubtedly reveal a bit of mountain goat, and so it was that some walkers seemed to have just that bit more trot in their step but for most of us, it wasn’t exactly a speedy climb.) Plus the National Parks had been careful not to waste tax payers’ precious money on too many walk markers, so we had some extra fun on the way up. But we arrived at last, huffed, puffed and chuffed.

Because we had been relatively efficient there was still time to stretch and relax before darkness fell when we could legitimately fall into our sleeping bags.

After a sound night’s sleep, interrupted at midnight for only a few hours by some late arrivals, we sprang from tents ready for challenge on Day 3.   All right, maybe there was not a lot of ‘springing’  but everyone was ready for more walking. Again the air was still, the sky azure and clear.

Today the plan was to head down to the Shoalhaven River, this time taking the equally precipitous White track.    How interesting that today’s path seemed  equally as steep as the ones we had covered on Day 2!   Small world!  But there were more stunning views too.  As we were edging our way down,  one walker began having some difficulties with her right knee and decided wisely not to push her luck.  So two of us turned around with her and headed back up.

Because your scribe was one of those heading back up, I cannot relate firsthand what transpired Down Below, but  as the others told it, once they had made their way down safely,  Gina announced her brilliant idea:  ‘Let’s do the Slot Canyon again!’

Reader, they did the Slot Canyon a second time.

Please see earlier description should you have a hankering for another vicarious brush with high adventure.

Alas, we have no firsthand account of this second visitation, but the group all returned safely, happily in mid-afternoon so we must assume the experience was a rousing success.  They collectively won the Two Slot Canyons in Two Days Award, a seldom conferred honour.

As for the rest of us?  We clambered back up, took a look at one of the Mass Cave and  then explored the Yellow Track, a more moderate walking experience but one that was filled with the loveliness of many wildflowers,  more views, a creek crossing and many happy families.

At dinner in camp kitchen that night there was time for the Bungonia Bunch to share stories and to smile with satisfaction over some full days of amazing walking under Mastermind Gina. And as we slept for a last time at the peaceful Bungonia campground, it was with very respectful visions of that Slot Canyon drifting through our dreams.