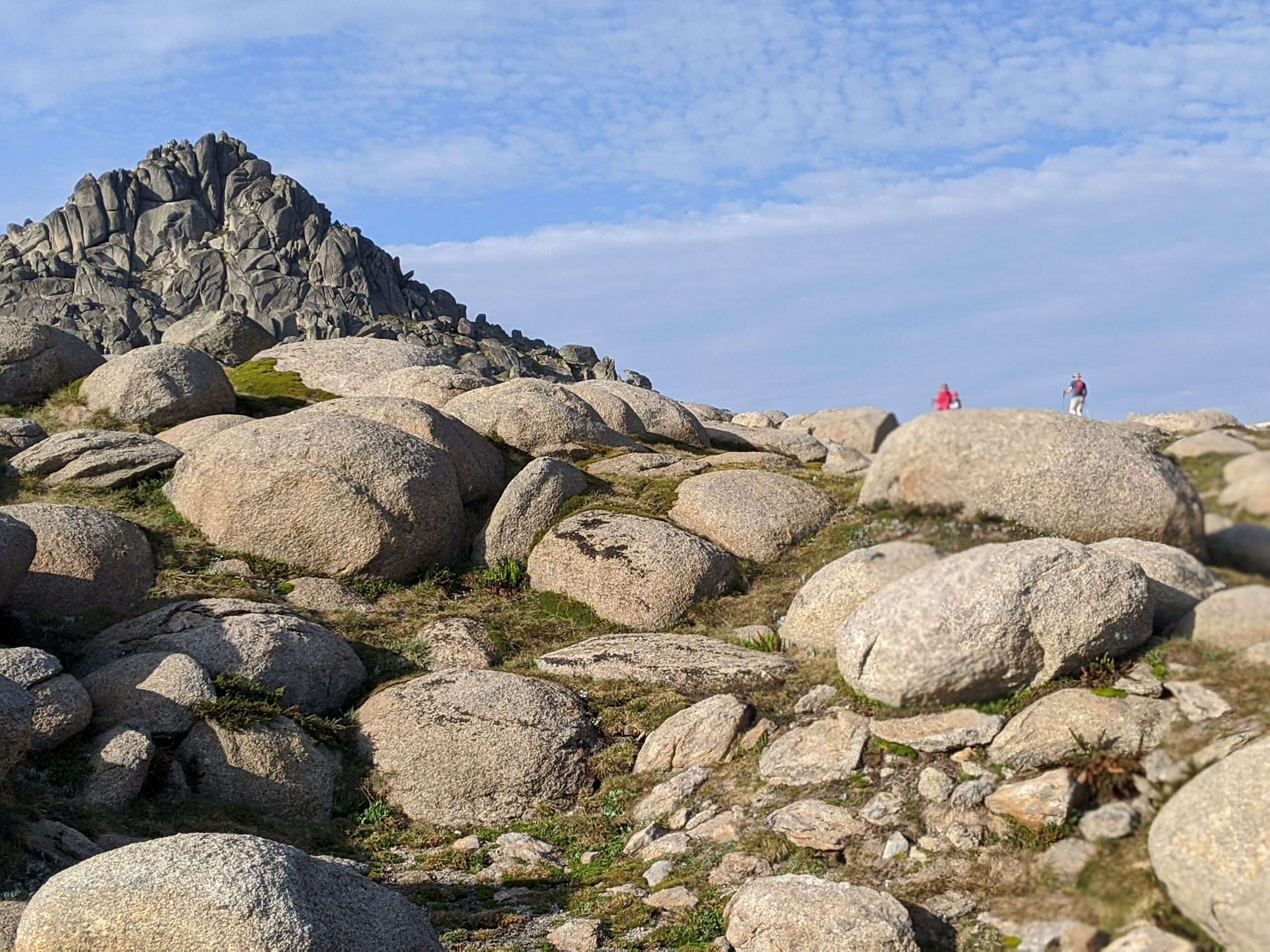 I wouldn’t call myself a peak bagger but I do like a good scramble, preferably with a dose of elevation to make me feel virtuous, so I try to put a few mountains on my hiking list every year. Australia’s highest peaks are all conveniently located next to each other and can be ticked off, one after the other. Peak bagging at its best! This is a 56km circuit (depending on your navigation skills) which can be covered in 3 days/2 nights (or longer) with stunning backcountry camping.

I felt this hike would be a good follow up to my recent Kangaroo Island Wilderness Trail where I had enjoyed camping without listening to anyone snore. Plus I expected it would be good training for my upcoming Travers Sabine circuit. I also wanted to test my dehydrating cuisine having developed a few lunch options. Lisa, who is a far better chef than myself, was keen to try her hand at dinners, and I was looking forward to a gourmet backcountry hike with our partners.

Leaving Jindabyne early we drove to Charlottes Pass to join a multitude of other walkers. I had no idea parking would be so tricky – hopefully everyone else was doing a different hike? I’m not really keen on wilderness that isn’t particularly wild.

I admit it was a bit of a slog going up the Main Range walk with a full pack and I was enviously looking at the masses with their day packs – not that they were necessarily faster than me! There was the opportunity to dump our packs for a quick exploration of the divine Blue Lake which is a good place for a break. We explored Blue Lake as far as we could – in part to avoid the crowds but mainly because the views improved the further we went.

Hikers dwindled after Blue Lake but we certainly didn’t have the place to ourselves. We continued uphill to an obvious track on the right which lead to Mt Twynam. Dumping our full packs again, we headed up this track (now with only a couple of other hikers) to bag our first peak.

We chatted to a couple doing the same challenge with aspirations to complete the circuit (minus a few peaks) in only one day. They helpfully showed us an app they were using called PeakFinder that was assisting with navigation. Using our higher elevation we were able to download the app on the go and found it to be a fantastic arsenal in our own navigation. Thank you for the tip! It’s one of those awesome apps that I recommend.

From Mt Twynam, it was a cross country hike to a lesser known (possibly no name) peak and then back to our heavy packs and a well earned lunch.

Continuing along the Main Range walk, we walked up Mt Caruthers and took a short detour to Mt Northcote having passed the rather lovely Lake Albina. Here the sky clouded over and the heavens opened for a short shower. It was clearly time to head for our overnight camping spot.

Choosing a camping spot proved more challenging than the hike. It’s amazing how four, tired people cannot agree. Since completely flat ground didn’t seem to exist, we chose a place close to running water but far enough off the main track where we had some privacy. The only thing we agreed on was to go lower in the valley to avoid wind. It was almost bliss except the heavens opened again but luckily after the tents were up.

For dinner we feasted on an amazing vegetarian chilli with fresh avocado salsa. Hiking food just hit a new high. It was a wettish sort of dinner, in somewhat easing rain, before we headed back to our tents, more rain and an early night. Our tent was on a gentle slope and I vaguely remember spending the night shifting my body upwards every couple of hours to counter sliding off my mat.

The rain continued most of the night but my tent kept us dry including the packs stored in the vestibule. It was the first time I’d ventured to share my tent as I admit a preference to having it all to myself. I was surprised how roomy it still felt. It was also hubbie’s first (ever) backcountry camping experience and he was pleasantly surprised too. He now wants to join me on more camping trips – I’m not sure that was an aim though of this hike…

Morning arrived with clear skies and the runners were already out on the Main Range track well before 7am. There were a few tents in the distance but apart from this we seemed to have the place to ourselves – well, for now…

We left our tents up to fully dry and headed out with a day pack to complete a circuit covering the next 4 peaks (one of which was not officially in the top 11 list but was more or less on the way and higher than some of the others – who does this list I wonder?). I estimated this was about 6 km but my navigation proved somewhat off and it was over 9km before we returned to our tents nearly five hours later. Lunch had never tasted so good.

Mt Townsend is a lovely scramble up but proved somewhat more challenging to descend. In hindsight we should have descended the way we went up. We also should have thought to have brought gloves as the rocks were harsh on our hands. Next time, perhaps?

The circuit however was delightful and it finally felt like we were in wilderness. We met the occasional peak bagger including a Canadian woman who insisted on having her photo taken doing a headstand on top of Mt Townsend’s column. She looked the part but I preferred to have my feet firmly on the ground.

After lunch, with our tents packed up, we headed back to the Main Range walk and towards Mt Kosciuszko – summiting it along the main path with a zillion other walkers. At some point around Kozzie my stomach groaned from having eaten my lunch too quickly and my mood rather deteriorated. The flies were also out and I had to don my rather attractive fly net to avoid swallowing a mouthful or two of pesky insects.

From Kozzie, we would have liked to have traversed cross country to the next peak but the route was closed to walkers to avoid crowds from tramping the fragile alpine vegetation. This certainly did not improve my mood as I had carried a full pack up to the top of Kozzie and then had to carry it back down again. Next time, I’ll leave it at the bottom.

We found our next camping spot somewhere after Etheridge Gap en route to North Rams Head. Here there was plenty of running water, flattish ground, privacy and views in all directions. The skies remained clear, the temperature almost balmy – definitely time for a quick refreshing dip in the alpine water before feasting on Lisa’s biryani rice. Backcountry camping at its best.

Following a stunning sunrise, we left the tents and heavy packs behind to bag the final two official peaks which were close by. The weather was definitely heating up but there was also a good breeze.

If you only have time to detour for one peak off the main path, then choose Rams Head North. Not only does it look like a fun peak but it’s rather spectacular too. It was actually a fairly easy route to the top once we identified the path on the eastern side. Rams Head (less than 2km away) had a more challenging path to find but was only marginally harder to climb. This short side circuit felt truly wild although that may have been a reflection of the early hour.

We had now officially bagged all eleven peaks! It was back to our tents for a snack and our packs as we observed the main range walkers out in full, taking advantage of clear skies. Whilst there was a main path back to Charlottes Pass, we decided to hike cross-country to avoid the masses. This was a shorter route but the terrain made it a longer option. The wind was picking up as we traversed across the ridge line to Mt Stilwell where there was again a formed path.

As we descended, the temperature soared. By the time we reached the car at Charlottes Pass, the temperature gauge read over 35 degrees. Sadly that day, the wind and high temperatures spread bush fires in the region and the park was closed the following day for several weeks. We were lucky to have completed our walk when we did and feel saddened by the events that then unfolded.

I’d been considering hiking this part of Australia for some time and was inspired by an email from Trail Hiking Australia outlining hikes over the coming summer. Australia’s Eleven Highest Peaks was being promoted for NSW. The timing was perfect as I’d been contemplating how to fill a few days between Christmas and New Year. Thank you to Darren for the awesome website he does to help hikers in Australia.

I don’t know who decided which peaks should be included in the official list of Australia’s Eleven Highest Peaks but it doesn’t seem that there is complete agreement. We decided that it didn’t really matter, so we ended up climbing 13 peaks in total – two of which were simply on the way.

Kozzie is only a six hour drive from Sydney and is far more accessible than visiting my favourite New Zealand alpine locations. Despite this, I confess to never having hiked in this part of Australia before. Perhaps this is a reflection on not being a skiier. However, I am now a total convert and looking forward to exploring more hikes in this part of of the world. Who needs to visit New Zealand when this is on your doorstep?

The only cost to complete this hike is the National Park visit/pass. Visit the office in Jindabyne to log your intentions and pre-pay the national park fees. If you have a NSW national park pass be advised that it may not cover Kozzie – check as the parking fine is huge!

Navigation is relatively straightforward but would have been challenging if the weather had closed in. However, I’m not sure it would be a hike you would want to do if you couldn’t see anything. In addition to having topographic maps, we used the GPX map downloaded from TrailHikingAustralia website which is free to members (free to join too but donations welcomed). It wasn’t always accurate but it was good enough for our purposes. We also loved the PeakFinder app.

There are a few guided versions of this walk if you prefer to have local knowledge. Many Sole Sisters have done this walk with Mike Edmondson (highly recommended) and our group has previously used K7 Adventures to guide in the area.

There are several places to put a full pack down and bag peaks off the main circuit so make sure to pack a day pack too. This makes it a fairly easy full pack hike to tackle. Also remember to pack a pair of gardening gloves for the rock scrambling.